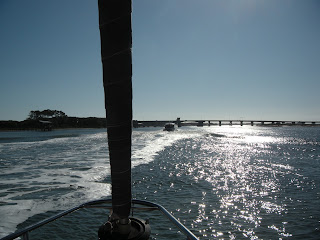 We have taken a slip at Adventure Yacht Marina, in South Daytona Beach, Fl. The great offload will begin in a few days. We have sorted, made both the easy and hard decisions of what to take home and what to keep for the Bahamas. Boxes and bags are stacked higher than Everest in the salon, and now that we are just waiting for our ride, I have a moment to reflect on our last day on the ICW.
We were seeing a lot more boat traffic since reaching the Sunshine State, more cruisers and more local traffic as folks take advantage of the mild days here.
We were coming towards what for us was a memorable opening bridge: the Crescent Beach Bridge. It was here where we met our nemesis, the STORM, last trip north in little Journey. Al took the camera and headed to the foredeck to take pictures of the marker where we put the boat aground, to keep from crashing into the bridge and of course of the bridge itself.
Suddenly, we were assaulted by a go-fast boat. Go-fast boats are not the little fishing skiffs that speed along past us. They don't bother us, as their wakes are inconsequential. These are full size cruiser or cuddy cabin boats that rock us side to side if they don't slow when they pass. And a lot of them don't. They are so fast thet they usually are passing by the time one even knows they are coming. And one passed us, rocking us and making it difficult to keep the boat in the channel with the current I was bucking.
Fortunately, Al was holding on to the furled Genoa, so I didn't have to go back and fish him out of the drink.
He took this picture right after the go-fast passed, as you can see, the guy is already in the next county.
Go-fast boats must not be confused with the Whomper-wake boats. These boats are anomalies in the boat design world. For whatever reason, whomper-wake boats throw a enormous wake whether they are going fast or slow. These poor boat owners are doomed to throwing sailboats side-to-side even when they give a slow courteous pass. You cannot escape the wake from a Whomper-waker.
I got on the radio to call the bridge tender, and it turned out that he was the same tender that had been so nice and concerned for us after the STORM. We were able to chat a bit about that fateful day and its outcome.
He told me to maintain my current speed so I could pass under the bridge as he opened it and have minimal distruption to the car traffic. I held my speed and was still bucking a real strong current.
When you go under a bridge, you have to stay inside the part that opens, and there are wooden bumpers that form a sort of fencing all along both sides of the channel. These funnel a strong current into the small area and make steering quite difficult to hold a true course at times. I have seen many a photo taken of sailboats that, because of their slower speed and lack of fine maneuverability, have slipped sideways and taken out masts and other vital parts of their boats because of current behavior. Running under a bridge in heavy current or cross-current is a two-hand job and it helps to hold your mouth right also.
Just as I neared the fencing at the approach, two idiots in a 14-16 foot aluminum boat, came towards the opening from behind the fencing to the left. They started to row across the opening. WTF??? A man and woman without so much as a brain between the two of them, was actually going to play "beat the train" with my boat! The bridge had been opened, they knew this because of the loud horn that the bridge tender sounds to warn car and boat traffic to that event. They knew I was barreling towards them at top speed, because I could see the fear in the whites of their eyes. Yet they calmly kept coming. And I could not abort at this point and slowing could have resulted in a loss of control and a real possibility of a contact with the bridge.
I told Al, who was back in the cockpit by then, that this had to be the stupidest stunt I have ever seen on the water, and that they better get a move on, because I was committed to the opening and they had cut in front of me in an area where I had restricted maneuverability. Granted, the comments were a little more raw than that, but for an agonizing few minutes, I think they must have thought of what it might be like to die.
I told Al I just wish I wasn't the one at the helm, because I had to pass under the bridge and give that all my attention, when all I really wanted to do was lean out of the cockpit and ream them a new one with my comments. (comments, in this instance, is a mild version of what actually would have come out of my mouth.)
I just wish we had pictures of this monument to utter stupidity as I can rest assured that I will live a long time before anyone tops their move.

we found that to be quite common in florida. On our trip back North we had a few close encounters..Kept the fog horn handy for them.
S/V Colleen Mae

Thanks Sue! I would have never thought to blast them! I've heard folks bless them out on the VHF, but they always seem....sad somehow, spreading their displeasure publicly like that. An air horn though, that has merit.

Lol...you guys are turning into me. My friends have taken to calling me "Alpha Mike 1" on the radio. AM1. Asshole Magnet 1.....Enjoy your crossing.

Right up there with "kite boy". Out of the gene pool you idiots. Natural selection is a cruel but vital process. LOL

Ha-ha you guys! I now feel rather tame up against you both! LOL