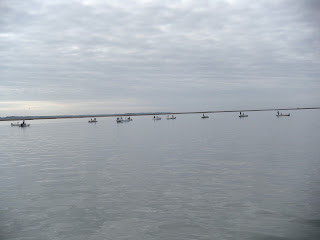 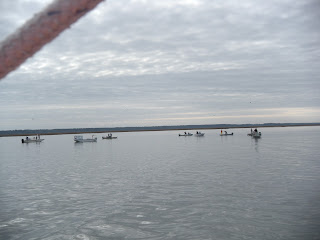 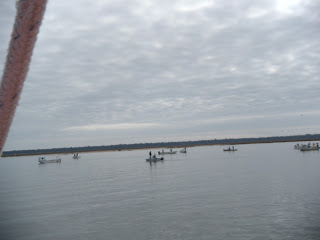 Now we've seen some weird stuff over the years on the water. Heck, we've even done some weird stuff. But this was leading the pack so far for this trip south. There we were, in south Georgia, in the middle of NOWHERE, nothing around for miles and miles. I kept seeing this bunch of dots off on the distance. First I thought they might be stumps, but as we got closer, it became obvious that it was a rather large gathering of Bubba's.
They were generally two to a boat, and not anchored, just bobbing around. Every now and again two boats would bump, and one arm would reach out and push off. No engines could be heard, I was getting a mite nervous as we approached. There were a lot of them, they were right in our path, what were they doing there?
I had been using the binocs to get a better glimpse of the non-action ahead. I could see no fishing rods being used. But then I didn't see any rifles or shotguns either, so that was a good sign. Every now and again, it looked like one would stand up for a minute. Were they watching us as we approached? The Dueling Banjo's theme thrummed in my head.
Finally we got close enough to start threading our way through them. And saw what the Bubba's were up to. Cast-netting! Each Bubba had a cast net between his legs. In turn, one would stand and cast, retrieve, and sit. Then the other boat occupant would stand and take his turn. I'll bet there was over 600 years of cast-netting skill and knowledge in that grouping, and I was sorry that I didn't have the opportunity to stop and learn what I could from them. Funny how I had cast those Bubba's differently from a distance.
No comments: Links to this post

Home on the Ranges

Today we went through 12 ranges on our way south down the Intercoastal Waterway. I spoke a bit about ranges on Journey's facebook page, but for our non-sailor friends, a picture is worth a bunch of nonsensical words, so.... 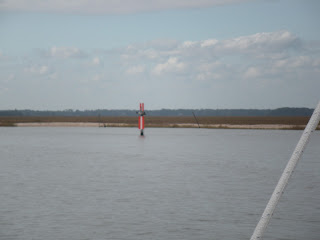 Now, in this first picture you see what looks like a orange sign, with a white stripe running right down the middle, top to bottom. In the second photo, you notice there are actually two signs, and they are not directly over one another because Journey has already begun her turn, and left the range. 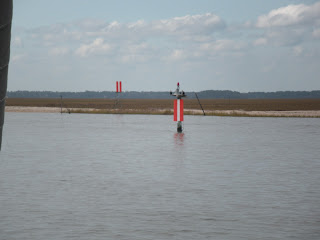 The trick is to line the sign posts up so that when you are seeing them like the first pisture or risk running aground. There may be lots of open water around, but it's all shallow outside of the range. Now how do you do this, when some of these ranges are over a mile long and the signs are that far away when you start? Simple: look at the lower photo again. The bottom sign is off to the right. Move the boat to the right until the signs line up again. (you would never want to get this far off of the proper alignment in a real range, you'd be aground.) Al and I are partying on Miss Ruby tonight here in our anchorage, along with Partner Ship, so I will leave you with this navigational "lesson of the day". We are just above Jekyll Creek in Ga. for the night.
2 comments: Links to this post