When we brought the boat to the yard last month, we hauled
the portable pump-out from the neighboring boatyard (with permission) to the
slipway when we tied up.  Long walk and it was heavy.
We hooked everything up and pumped, pumped, till we realized the
dang thing was broke.  We hauled it all the way back to the neighboring boatyard, and hauled Journey with two full waste tanks.  Since then, Al has started to notice an odor emanating from the forward head.
Yep, we were starting to smell like shyte.  There’s only one way to fix that…. Pump. So we went over to examine the portable pump out again. Eureka, it had “stuff” in it! That meant that it had worked for someone else recently.
There was hope. So we pumped out the left over shyte into the shyte pipe in the ground and hauled the portable pump out over to the boat.
We hooked it up and pumped, pumped, till we realized that the dang thing was broke.  Great.
Then we remembered Messy Nessie. 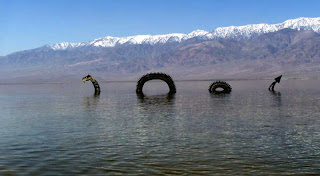 Al built a pump out hose for us to use when we are offshore. Sorta looks like the Loch Ness Monster, hence the name. I’ll leave you to figure out how the Messy works into the equation. We hooked up Ms. Ness to the boat pipe and I placed the other business end into the hole in the portable pump out.
We pumped, pumped, and words cannot describe the stench that erupted from the confines of
that hose, but suffice to say, that effluent was transferred, Messy Nessie got a thorough washing out and we are empty, disinfected and smelling like mint, according to the label on the bottle of tank treatment. We emptied both tanks, then hauled the portable pump out back to the neighboring boatyard, and dropped the hose in the pipe and found it was still broke.
We left this recurrent theme for someone else to solve.

So its true.....shit does roll downhill